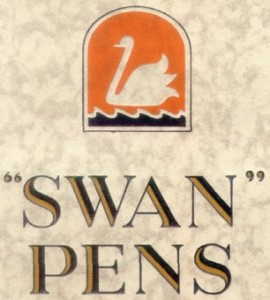 To speak of the Swan as a model is a little foolish, not unlike saying “Cadillac is a model made by General Motors.”  There is so much variation in the Swan that it has to be treated as more of a subdivision, and it is one with which I am sadly not deeply familiar with.

As far as I can discover, Swan was not so much a model as the brand name applied to the fountain pens of the company in toto, at least until the introduction of some of other birds into the aviary, used across a variety of models as was Waterman’s “Ideal Fountain Pen”.  Also like Waterman, the actual models are distinguished by a slightly obscure numbering system.  In fact, Swans’ numbers are even more occult than Watermans, but are at least a little less arbitrary than those of Conway-Stewart.

The earliest Swans were eyedroppers, with a lever-filling option appearing in about 1915.  There was also an “Inksight” filler, essentially a bulb-filling arrangement with actual glass portholes in the barrel, which appeared for a time around 1913.  This very early, possibly even first, use of a bulb-filler suggest against  some accusations of conservatism in the company, although the continued appearance of eyedropper pens under the heading of “Non-Self-Filling” as late as the 1932 catalogue ad possibly beyond undermines notions of forward-thinking.  There was also a rather complex accordion-filler and a unnecessarily complicated expression of Parker’s Vacumatic system, from 1934 and 1937 respectively, both using the name “Visofil”, and some slightly more reasonable (from a repairman’s point of view) twist-fillers, which also showed up first in 1934.  Levers continued to be available, right though the post-war production.

In 1924, some variants of Swan were labelled “Eternal”, in keeping with the vogue started by Sheaffer for life-time warranties.  This was a superior line within the Swan family, which meant from that point it was possible to buy a Swan without buying the best sort of pen Mabie, Todd & Co. made.

Post-war examples frequently have a separate brass ring for the threads to hold the cap to the barrel.  This appears to have been done for purely decorative reasons, as there’s no structural nor functional rationale for it.

In the late summer of 2011, a group of us on the Fountain Pen Network put our heads together on the meaning of the numbers applied to the various models of Swan.  I’ve rendered that information into a couple of charts for the general assistance of the public.  These are speculative to a degree, and will be updated as more data surfaces (or is offered by kind passers-by).  Neither chart is applicable to eyedroppers, which have their own (generally) four-digit codes, and which I lack the energy to try to sort out.  The pre-war chart does have some bearing on Blackbird models, if they’ve got a model number imprinted.  I have since borrowed a couple of even earlier explanations from the company itself, or rather themselves; one from the UK in 1908, the other the US system of 1921

Cost When New: Noted on individual examples, where available.

Body: Hard Rubber in earlier models with metal overlay in some cases, switching gradually to celluloid in the 1930s.

Mabie, Todd & Co. Swan 3230 – this grey tends to discolour rather madly, so I flatter myself that this is a relatively good example of it (although that’s not the right point)

Swan 3261; a strange hold-out use of black hard rubber.

Permanent link to this article: http://dirck.delint.ca/beta/?page_id=1343